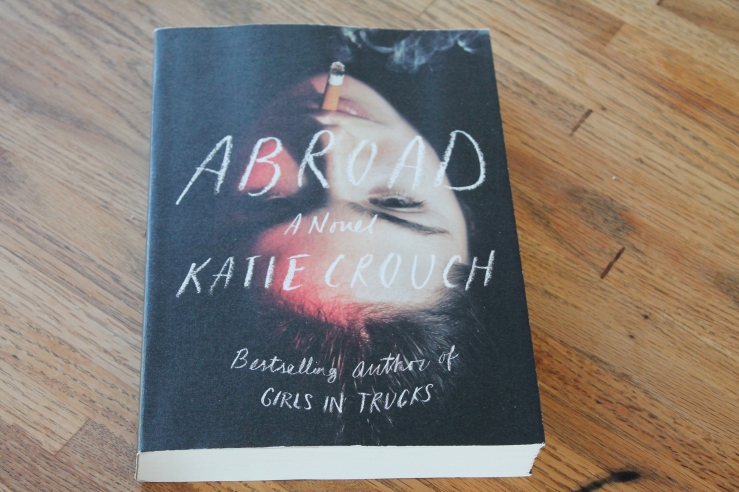 This is one of those books that dwells in my mind for days after I finished it. So while it might not be the most literary or the most well-written, it certainly succeeds on some level.

The novel is a not-at-all thinly veiled re-telling of the murder of Meredith Kercher. If that name doesn’t sound familiar, it’s because the name of Amanda Knox has taken over the story in popular media.

Abroad is the story of Tabitha Deacon, an Irish girl in her early twenties, on a year-long exchange to Italy. She will spend the next year in Grifonia, living in a rundown little cottage with two Italian roommates and another exchange student, an American named Claire. Tabitha, or Taz as her friends call her, is studious, a little shy, but looking forward to a year of new adventures, of being someone different, away from everyone who knows her. Claire is beautiful, vivacious, impulsive, and affectionate. The two girls become friends although their social circles remain largely apart.

Taz’s social circle becomes the B4 – Jenny, Luka, and Anna – three dazzlingly beautiful and wealthy British girls who attract attention and power everywhere they go. When they invite Taz to complete their foursome, she knows she doesn’t quite fit in but she is excited to join their circle. With the B4 she is part of a desired circle, with access to extravagant parties and places. It’s clear from early on that while Taz is part of their group, she isn’t close with any of the girls and they are holding her at arm’s length from the true dynamics of their friendship. Compared to this, Claire offers a friendship that is almost immediately too close.

There’s a key conversation between two of the characters about how they “get to be this happy right now”. It was a great expression of how young adulthood is so often viewed – as if your twenties are the only time you truly have to be free and happy before you are saddled with real responsibilities and life grows more and more depressing. While some of this is true – Taz, for example, is living on her father’s dime and her responsibilities are limited to her schooling (which she doesn’t seem to devote much time or energy too). But as someone fresh out of my twenties, I can’t help but rebel against this fallacy. I loved my early twenties and I loved the freedom and atmosphere of university and the friendships I had there. (Much healthier relationships than Taz has, by the way.) But I’ve also loved the adventures and responsibilities that my late twenties and, now, my thirties have brought. Happiness is not a finite resource. We can have it at different times of our life and part of the tragedy of Taz’s life and death is that she never learns this.

Much of the tension of the novel comes from the fact that the reader knows early on that Taz will be murdered. Taz is the narrator of the story (reminiscent of The Lovely Bones though not, I think, as well-rendered) and refers to her own murder though how it happens and why and by whose hand remains a mystery until the very end. As well, throughout the book are historical stories of “good deaths” and a mysterious society who orchestrates these deaths, always of young women. The novel puts a lot of emphasis on the Etruscan history of Grifonia (a fictional city), including a course that Taz takes. At times this becomes heavy-handed and by the time we see the importance of the “good deaths” in Taz’ own life the connection feels tacked on. I think it’s modern day connection should have been fleshed-out better, if the author wanted to go in that direction but I think, overall, it was an unnecessary addition.

In the end, the novel left me with an uncomfortable feeling of looking too long at something private. It made me wonder, How soon is too soon when it comes to fictional re-tellings of real life events? How would Meredith Kercher’s family feel about such a story? My gut reaction is that the too much of the story’s tension and suspense comes from its connection to the real life death of a person. While there are a lot of additional details and plot lines that Crouch has created, the story, setting, and characters follow real life very closely and I think the book suffers for that.