This summer Peter and I went on an adventure to Europe. With the help of a stellar memory and my obsessive journalling, I’m sharing those adventures with you.

We left Rome early on a Saturday. The regional train was cheaper so we were on a four hour trip from Rome to Pisa. Getting on at the start of the route meant that Peter and I got to sit together. Before long, the train was standing room only. Long tunnels left us in total darkness for several moments at a time.

In Pisa we had time only to find a washroom before we hopped on our next train, this time to La Spezia. From La Spezia, one more train – this trip a short one – to Vernazza. The stops aren’t announced and they’re close together so we counted off carefully. Vernazza was town #4 in the Cinque Terre.

From the moment Peter and I started planning our European adventures, we knew the Cinque Terre would be a part of it. We were excited to get there and to relax on the Mediterranean but nervous too. Could this place really match up to our expectations? (Spoiler: It did.)

Vernazza is a tiny town with a tiny harbour. Most of the town exists along one main street, with the ocean on one end and the train station on the other. The buildings are fading pastels and, facing the water, a stone church sits on the sea’s edge. A tower looms on the hill above. We stayed in a beautiful little place off the main street (Vernazza Vacations) and were in Vernazza four nights total.

We swam right away, before even rinsing the train sweat from our bodies we were scrambling over rocks and jumping in the ocean. It was wonderful. Warmer than our ocean at home and noticeably saltier.

One of the great things about our time in Vernazza was that there wasn’t much to do. There was no pressure to visit a museum or a famous church because there weren’t any. We could swim and eat and hike, guilt-free.

On our first morning there we hiked the trail between Vernazza and the next town over, Monterosso. The hike was about an hour and a half through the hills, looking out at the ocean the whole time.

A lot of uphill on rough, sometimes narrow trails but terrific views overlooking both Vernazza and Monterosso. And it was hot. Oh, how we sweat. Physical exertion plus the heat meant before we’d finished our first uphill stretch we were wiping sweat out of our eyes and feeling it trickle down our spines. All I wanted was to jump back in the sea but I consoled myself by observing that everyone we passed on the trails was just as sweaty as us!

We passed vineyards and olive farms. And these sleeping cats. 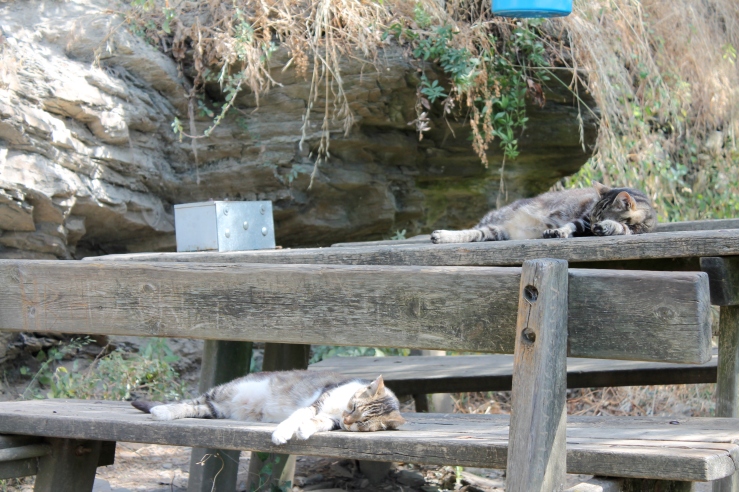 Monterosso is a larger town than Vernazza, rather more resorty. Unlike Vernazza, it has long sandy beaches, though you have to pay to access most of them. Like Vernazza, the town stretches back and up the hill. We bought cold cokes and drank them sitting along the waterfront.

We meandered through streets and stores, admiring locally-made souvenirs, and picking up a few things at the grocery store (which was larger than the store in Vernazza) before we headed back on the trail.

By this time it was about 12:30pm, probably the hottest time of the day to be hiking. Needless to say, our ocean swim when we got back to Vernazza felt amazing. At least, I had a lovely time. Peter got bitten by a fish. (He survived though when asked about it now he tells me, “It hurt. And it was very surprising.) 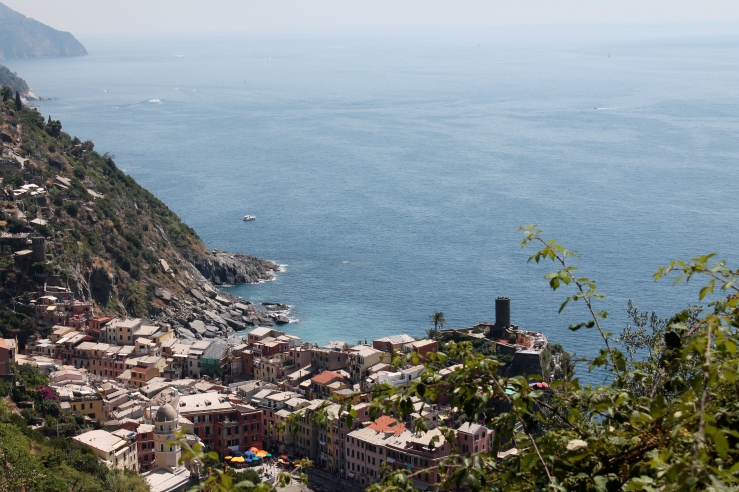 After our swim we had lunch in our room. Fresh bread, white wine, and pesto. That simple meal by the window, overlooking the street below, ranks in the top meals of our whole trip. Pesto was first created in this region of Italy and it was the best I’d ever tasted. The wine was local too – white wine is the specialty of the region. Normally I’m a red wine drinker but cold white wine on a hot day after a hike in the Italian hills and a swim in the Mediterranean…what could be better?

The next day we planned a hike in the opposite direction. This was to be The Big Hike to the remaining three towns of the Cinque Terre – Corniglia, Manarola, and Riomaggiore. We figured about ten hours round trip so an early start was required.

Starting early was actually really great. It took us about forty-five minutes to reach Corniglia from Vernazza and, while still warm, it was much cooler to walk early in the morning than our hike from Monterosso had been.

Thetrails were quiet and the light was beautiful over the ocean and across the views of the towns below.

When we reached Corniglia, about eight o’clock in the morning, we learned that the rest of the trail was closed. In the autumn of 2011, there was a serious flood in the region and while the recovery has gone well, there’s still a lot of damage.

With ten hours suddenly freed up in our day, we lingered in Corniglia, a smaller town than Vernazza, and just waking up. Corniglia is located on the clifftop, not on the water. We enjoyed the panoramic view point and then searched out a cappucino.

We decided to take the trail as far as we could, which brought us through the other side of town along a path lined with boarded up stalls until we reached a boarded-off tunnel. 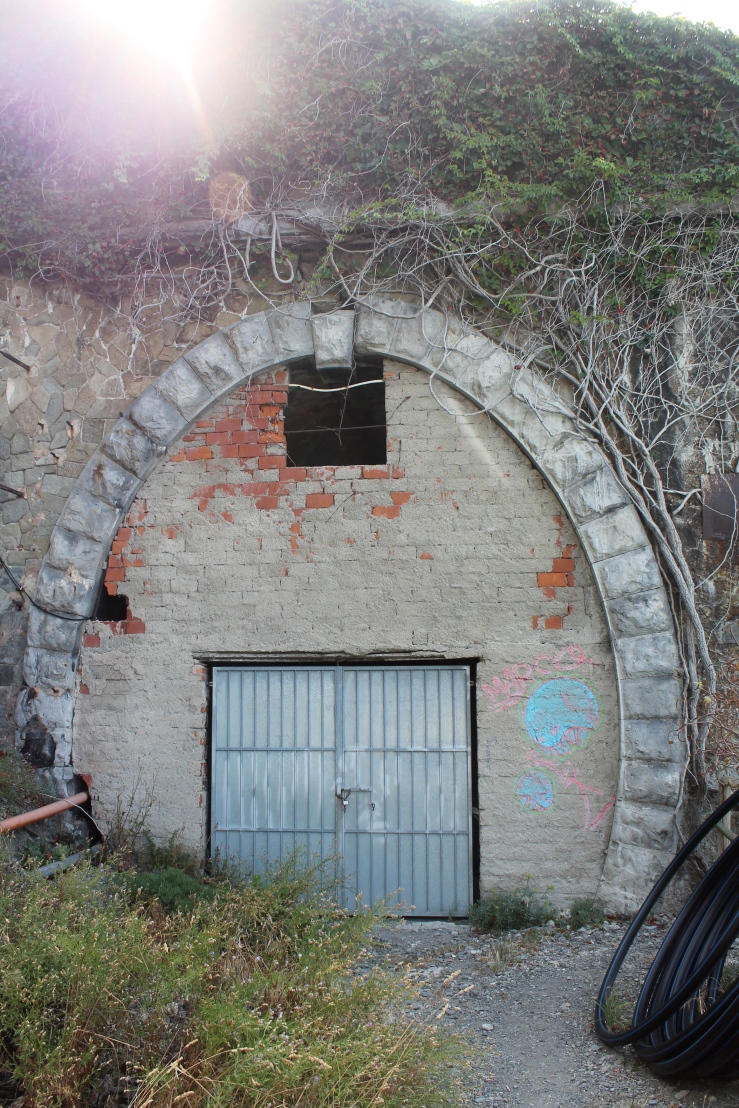 The hike back to Vernazza was hotter and busier. Thinking we’d be out all day, we had a backpack full of food and drinks. We stopped along the way to eat and lighten our load. (And by “our load”, I mean “Peter’s load. All I carried was the camera.)

Again, the beach beckoned when we arrived in Vernazza. Due to “the fish incident” we found another area to swim, pausing for gelato, then back to our room for siesta.

In the evening we dined up the hill, a terrace overlooking the sea. 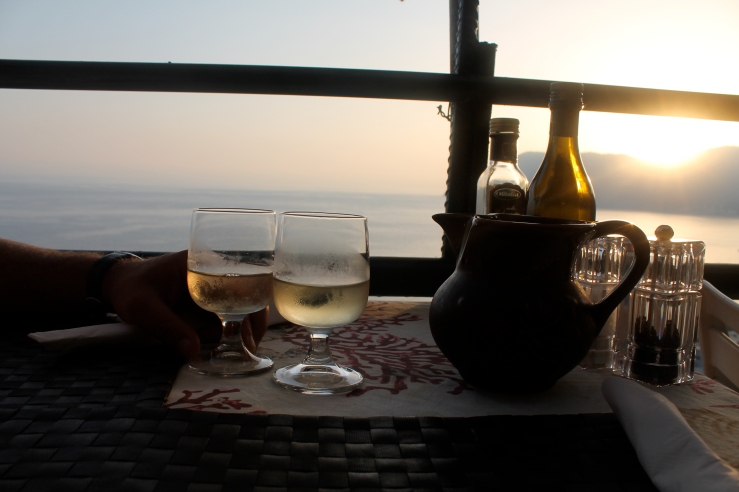 The evening, dark, the street still full of people, was perfect people-watching time. We sat on the breakwater and picked out the locals versus the tourists. The rotund and extremely-tanned man who’d spent the day ferrying people around in boats while wearing nothing more than a yellow speedo, had now added a Scottish-style hat to his ensemble. The same couple we had seen the night before walked by holding hands. The family we’d smiled at while sipping cappucinos the previous day pushed their sleeping infant in a stroller.

The next day was market day and we watched the trucks pull in and people set up stalls from our window before heading down the street for cappucinos. The same place we visited for gelato, oddly called “Stalin’s”. At the beach we swam and read and swam some more and watched Italian teenagers dare each other to climb higher and jump further along the rocks to the water below.

For the entire time we’d been in Vernazza, we kept seeing people walking around with what Peter and I had begun to describe as “fish cones”. Yet we couldn’t figure out where they were coming from. That afternoon we got into a line while we tried to figure out if this was the line for the fish cones. The line was long so Peter popped into the market next door and brought back a litre bottle of beer, which we drank while we waited. The man in front of us looked us up and down, told his wife to wait a moment and soon came back with the same bottle of beer.

Fortunately we were in the right line and we were soon proudly holding our own fish cone. All different kinds of fried seafood in a rolled up corn husk. There was calamari, the local anchovies (like no anchovy you’ve ever had before), as well as other fish we couldn’t identify but was positively delicious.

In the evening our excellent food experiences continued as we decided to dine a little off the main square at a restaurant was called Il Pirata delle Cinque Terre and it was Sicilian style. They advertised gnocchi, which was something we both wanted to try before we left Italy.

The owner chatted us up, asking where we were from and telling us how busy he would be come September. I ordered gnocchi with four cheese but Massimo shook his head and asked if I liked pesto.

“Yes,” I said, though I felt like I’d been eating a lot of pesto lately.

“Sure,” I said. He asked if I had any allergies and told us he’d bring us something good.

And he did, oh he certainly did. Hearty and creamy and full of flavour. We heard Massimo have similar conversations with other guests who tried to order gnocchi with cheese.

“That is for babies,” he told them.

Dessert was panna cotta and berries for me and canoli for Peter.

“Sicilian dessert is the best,” Massimo told us while also bemoaning the lack of good bread in Vernazza. “I would make my own, but I’m not allowed.” We sipped espresso and ate our dessert and told Massimo we’d be back for breakfast in the morning.