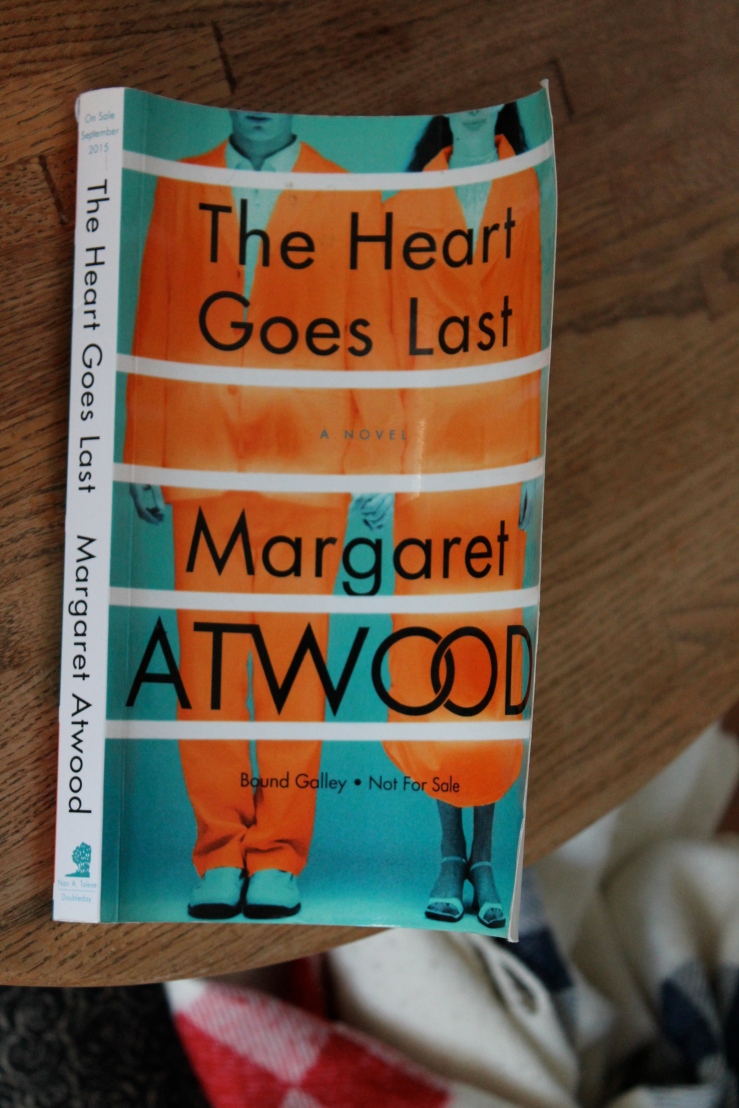 I have to confess – I’m not a fan of Margaret Atwood’s writing. I tell people this like I’m confessing a guilty secret. Something a little dirty; certainly not something a good Canadian feminist reader and writer should think. But there it is and it’s the truth.

Don’t get me wrong, I fully appreciate that Atwood is talented. She writes compelling, imaginative, and strong fiction (and poetry too) but she just isn’t my cup of tea. Her writing is too bleak for me, her characters too darkly irredeemable.

All of this is present in Atwood’s latest novel, The Heart Goes Last. Similar to A Handmaid’s Tale, the setting is our world, slightly in the future. Following a major economic collapse, much of North America is hugely depressed. Unemployment is as high as 40% in some places, the eastern states being the worst. Crime is at an all-time high and many people are struggling simply to survive. Stan and Charmaine are our main characters. They’ve both lost their jobs, and subsequently their homes. They’re living in their car, constantly on the move in order to evade the violent gangs. When they find out about a walled city called Consilience, it seems like their prayers have been answered.

Consilience provides a house for everyone and jobs for all. The only catch is that every other month is spent inside of Positron Prison. But even that doesn’t seem so bad when you’re given a job there too and all the real criminals have been dealt with.

Like I said, Atwood’s writing is strong. She does a fine job of creating a terrifying but almost believable future. She shows us how normal people can end up in extraordinary places and do horrifying things and she makes it all make sense.

My primary problem with The Heart Goes Last was that it really felt overly salacious. As in, there’s a lot of sex in it and most of it seemed simply designed to shock rather than advance the plot. The secret at the core of Consilience has nothing to do with sex (and is quite shocking enough on its own) but ends up being rather overlooked in a cloud of “prostibots” and weird mind-wipes. There’s a whole portion where Stan is basically held captive and forced into sex against his will with a woman other than his wife and yet it’s all written off as “necessary” and a part of the larger plan. I want to give Atwood the benefit of the doubt because she certainly isn’t one to demean women or abuse survivors but the book really doesn’t address Stan’s abuse in any meaningful way. Instead, Stan comes to believe that it makes him and Charmaine even after she has an affair. Never mind that one is consensual and the other is not.

The ending is not exactly a happy one and is kind of horrifying actually (with an extra twist right at the end), though if you’re expecting a happy ending you probably haven’t read Margaret Atwood before. I did appreciate how there is a lot in Stan and Charmaine’s past that is alluded to but never fully revealed. It makes them – especially Charmaine, who could seem a little flat with her sugary-sweet demeanour – seem much more fully realized and realistic. Atwood is talented but the book left me with an icky feeling that reminded me why I generally avoid her.

(This is a minor (and possibly ridiculous) critique so I’ll put it right here at the end but I thought the main characters were misnamed. Stan and Charmaine are supposed to be in their mid-30s but because of their names it took me way too long to realize that and I struggled to picture them as anything less than a couple in their seventies.)