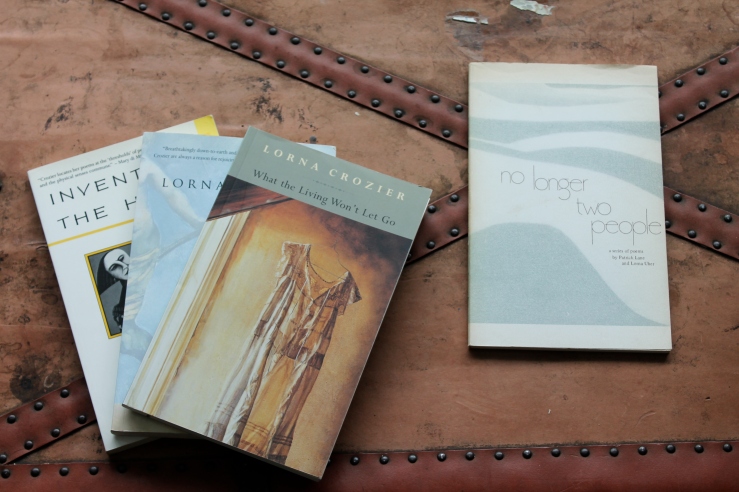 If you are a Canadian reader of poetry chances are good that you know and admire Lorna Crozier. If you are everybody else in the world, you’ve probably never heard of her.

Lorna Crozier is one of the best living poets today. She’s written more than twenty books, mostly poetry. Her poems are lyrical and thoughtful, full of story and beauty, sometimes hints of violence. Take this stanza from her poem “Younger Sister: What’s in the Blood” (from What the Living Won’t Let Go):

Our mother said the war made her father
strange. In the middle of the night
he’d wake up screaming. Someone had slid
a cadaver’s leg between the bedclothes.
A gruesome thing, white and cold,
he’d throw it from the mattress,
him landing with it on the floor.

The way Crozier breaks her lines is nothing short of brilliant, adding all sorts of extra meaning and strength to her poems. The story-telling nature of her poetry makes it more accessible to the casual (or new) reader of poetry. You can enjoy Crozier at face value, although there is much more there.

The natural world is also a hugely important aspect of Crozier’s writing. Her latest book, with the photographer Ian MacAllister is actually all about this. From the poem “Noah’s Wife” (found in Everything Arrives at the Light):

The salamanders, too, with their grace.
Their fingers seemed to stroke green
music from the air.

Crozier makes up one half of the Canadian Poetry Power Couple (if there can be such a thing!), together with her husband, Patrick Lane. Personally, I prefer Crozier’s work but it can be fun to read the two poets in tandem. One of the books pictured above is a series of poems that Lane and Crozier (under the name Lorna Uher) wrote together in 1979 – no longer two people.

I was fortunate enough to have Lorna Crozier as a professor for two terms at the University of Victoria. I learned a lot from her then and I continue to learn from her when I read her poetry. If you’re new to the Canadian poetry scene, Crozier is a great place to start.