Summer isn’t exactly over but the end is creeping nearer. And with the smoke and haze we’re currently experiencing it doesn’t feel very summery now. (The smoke is from the 500+ forest fires in BC right now and much of the province is in a state of emergency so I know I can’t complain just because I have to keep my kids indoors. We are praying hard for rain.)

While we didn’t accomplish everything on our Summer To Do List (do you ever?) we’ve had a full and fun summer. Pearl is three-and-a-half and Rose is almost eleven months and they are at such fun and interactive ages. 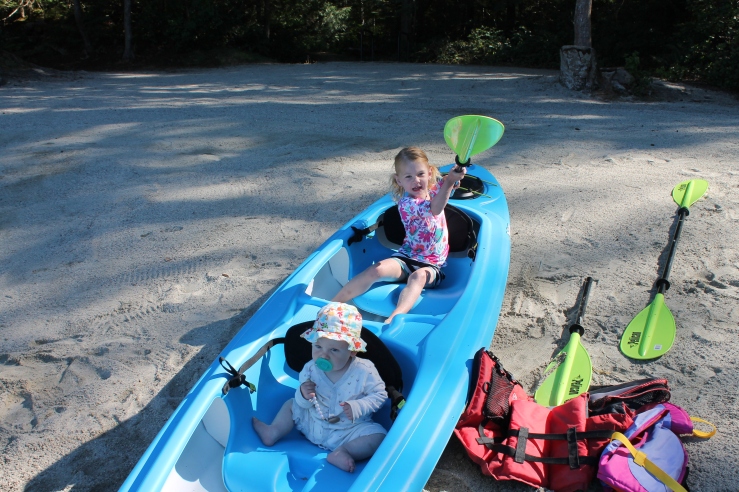 We purchased a kayak at the beginning of the summer as part of our goal of investing in outdoor experiences and we’ve had a blast using it so far. Mostly it’s been Peter and Pearl in the double kayak since Rose isn’t exactly Predictable at Sea but they’ve had fun and we even used it on a camping trip. (We’ve been camping three times so far with one more trip planned and I hope to post a bit more on what we’ve learned about camping with little kids.)

Next summer we hope to get a second double kayak and so get the whole family out on the water.

Along with the kayak we’ve enjoyed plenty of beach time at our local beaches and lakes and some local hiking.

We also bought a secondhand bike trailer to cart the kids around but with the poor air quality we haven’t yet had a chance to use it much.

(Also, Rose doesn’t have a helmet yet so we haven’t gone farther than the park down the street.)

Peter worked part-time. Pearl did a swim class – her first without parent participation! It was a bit of a learning curve for our little introvert but she did so well and really did learn a lot. In lieu of preschool this fall I aim to create some more structure in our schedule and I’m excited to get Pearl in more classes.

The girls and I found all our local blackberry picking spots and have a freezer full for the winter.

There have been many trips to the library and lots of book reading, as usual. Some sister snuggles and some sister pushing and more hair-pulling than I would like. We welcomed a new nephew and had friends over for meals. I took the girls for lunch at a sit-down restaurant by myself (kind of a disaster) and Peter and I even got in a couple of dates on our own. (We celebrated our 8th wedding anniversary in August!)

Some friends visiting from out of town wanted to go to the Vancouver Aquarium. We’d never taken the girls before but Pearl loves fish. She vaguely remembered visiting the Seaside Aquarium in Oregon in 2017 and immediately asked if she would be able to touch the fish.

The answer was yes – she got to touch fish.

Rose was less into it. (Good thing she was free.) The highlight for me though was watching Pearl with this otter. We stood for a long time at this little window where we could watch the otters swim underwater. This particular otter had a frisbee and kept coming to the window where Pearl stood and holding the frisbee up to her, putting its paws against Pearl’s hands. It really seemed like the otter was playing with her and Pearl was thrilled. 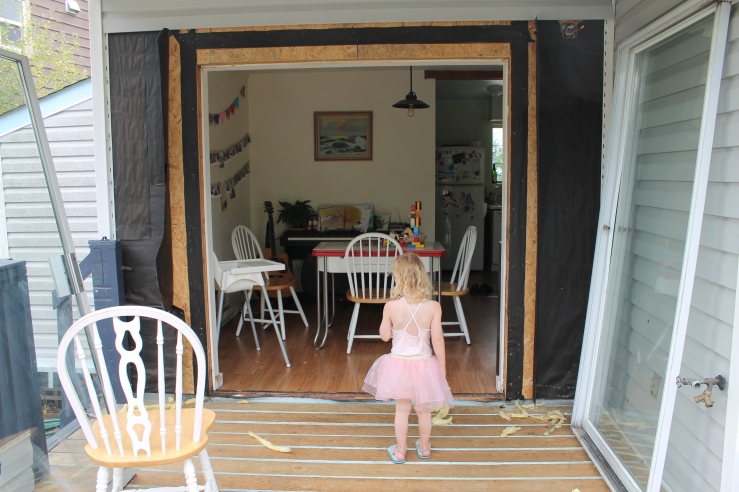 August saw us tackling a big house project (and by us I mean 98% Peter). Our house, being built in the 1980s, had old windows and every winter we’ve dealt with a lot of condensation and moisture. This summer we replaced half our windows, including our big sliding door.

Mid-August I made a gentle return to the workforce by working at the Sunshine Coast Festival of the Written Arts for the weekend. It’s always a really fun literary festival full of Canadian writers. I’ll be returning to work (very) part-time in September so it was a nice re-introduction.

There is a lot to look forward to for us this fall but I will also be sad to see the summer end. We are fortunate to have Peter home more for the summer and to be able to have a flexible schedule. Thankfully, we still have a few more fun things planned before September arrives!