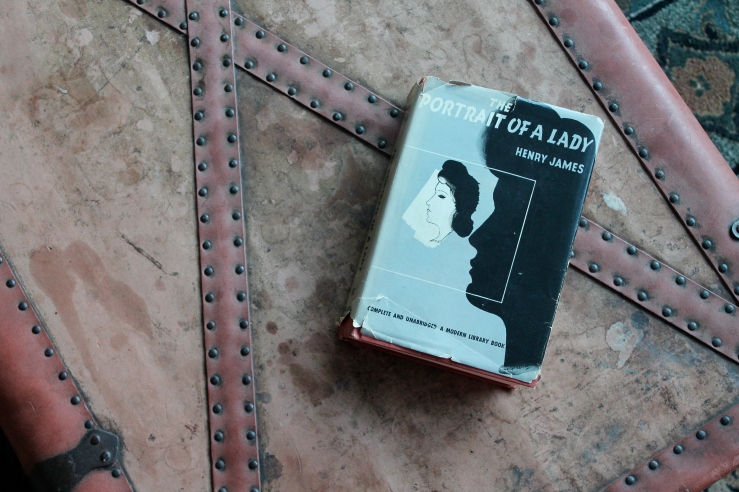 I made an attempt on a Henry James novel once before and didn’t get far so I didn’t have high hopes for this book (not to mention that it’s about 800 pages long). Fortunately, I was very pleasantly surprised and was drawn in by the characters and plot almost immediately.

(Warning: I always try to avoid spoilers in my reviews but found it hard with this one so if you don’t want to know anything about The Portrait of a Lady, read with caution. I did my best.)

Our heroine is Isabel Archer, a young American woman whose father has recently died. The path of her life is altered when an aunt she has never met finds her and offers her the chance to travel through Europe. This aunt, Lydia Touchett, lives most of her time in Florence while her husband lives with their son, Ralph, in England. Isabel quickly enters into their family life, growing close to both her uncle and her cousin.

I often find I don’t enjoy nineteenth century novels because I don’t like the female characters. (This is my major problem with Jane Austen novels.) Isabel Archer was a pleasant surprise. She’s intelligent, humourous, stubborn, and idealistic. She treasures her independence. So much so that, even though she is not wealthy, she rejects two marriage proposals in quick succession because she wants to be free to do what she wants. She’s quite a modern woman. When she receives a large inheritance, it seems like she will finally be able to live freely as a single woman. The money also gives her the choice of marrying for love, rather than the more mercenary options so often left for a young woman in this society.

One of the recurring themes of the story is the differences between Americans and Europeans. Isabel’s newly discovered family are Americans who have lived most of their lives in Europe. It’s their home but they aren’t quite European. Most of the characters fall into this category of Americans living abroad, some of whom have rarely returned to the United States. Contrasted to that is one of Isabel’s romantic prospects, an English lord who has all the stability and prestige of English history behind him. Isabel’s closest friend, a literary young woman named Henrietta, comes to Europe to visit and travel with Isabel and Henrietta is thoroughly American. From her attitudes to her interactions with the Europeans, to her brazen manner of travelling alone or (gasp) travelling alone with a man. Henrietta is so concerned that Isabel will be changed for the worse by Europe that she pushes her toward marriage with the young American man who has followed Isabel from Boston. But Isabel is stubborn and chooses her own husband for her own reasons. Or so she believes.

The second volume of the novel takes place a few years after Isabel’s marriage. We learn quickly that it has not been a happy one. At every point, Isabel and her husband seem to be at odds. They live in Rome and Isabel has not seen her family or most of her friends in her years of marriage. She is isolated by her husband and, perhaps even more so, by her refusal to admit to anyone how unhappy she really is. This portrait of an unhappy marriage is chillingly drawn. There’s no violence, there’s very little anger, but there is the heavy pall of abuse over her husband’s every action and we watch it grow as we delve deeper into Isabel’s mind. The conflict grows steadily until, inevitably, it comes to a climax between them. One where Isabel must make a decision to defy her husband and to then decide what happens after. Along with this is the unexpected reveal of her husband’s darkest secret, something that propels Isabel into action.

Here is where the novel shows us how society has changed. In a modern setting, Isabel and her husband would divorce. Isabel wouldn’t be trapped in quite the way she is in a nineteenth century marriage. Even in the novel, we have characters encouraging Isabel to leave her husband but Isabel stands firm in her belief that she has made a vow and must stick to it, no matter the consequences. Close to the end of the story, Isabel makes a second promise with far-reaching consequences – depending on which direction you imagine the delightfully vague ending goes.

I found that where the novel felt most dated was in the men’s attitudes towards women, and the women’s acceptance of such behaviours. While accurate to the time and culture, it’s frustrating to a modern reader. Isabel has an admirer who follows her to England from Boston (after she has rejected him) and then, when she rejects him again, insists that she can’t refuse him because she hasn’t got a good reason. As if, “I don’t want to marry you” is not a good enough reason to not marry someone. But poor Isabel feels badly about the way she has treated him, and is made to feel badly by her friends. If a man acted towards me the way Caspar Goodwood acts toward Isabel, I wouldn’t call it romantic and I wouldn’t feel sorry for him. I would call the police because he is harassing her.

In a similar vein, the characterization of another young woman in the novel, Pansy Osmond, was baffling to me. In the first half of the book, Pansy is about fifteen-years-old and has just left convent school. In the second half, she is a young woman, beginning to field romantic prospects. The way she speaks and acts though had me wondering if she was supposed to be a bit simple. She’s so completely docile as to be unrecognizable as a human being. The reader is made to understand that her character has been deliberately molded by her father, a man revealed to us as more and more evil. But people just aren’t that easy to mold. Pansy really has no discernible character aside from a seemingly endless desire to please others, regardless of the cost to herself. I actually found that reading about her creeped me out. It certainly does cast a dark shadow on who her father is but I’m not sure that James intended me to have such a reaction to Pansy herself.

There is some really beautiful writing here. A lot of it is old-fashioned to our modern ear but the novel still reads easily and well. I found myself reading the last section quickly as secrets were revealed and choices were made; there was quite a bit of suspense. I will have to re-evaluate my opinions on Henry James

6 thoughts on “Book Review: The Portrait of a Lady by Henry James”